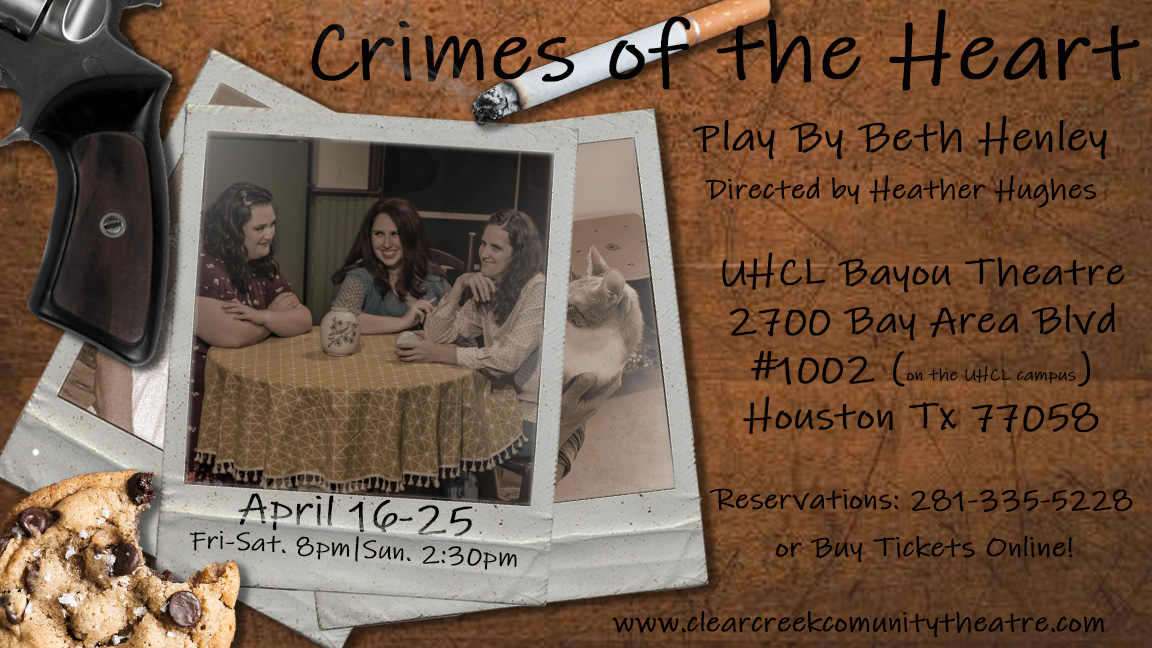 CCCT is delighted to present Beth Henley’s Crimes of the Heart.  Our original production was just days from opening in March 2020, at the onset of the pandemic. Out of concern for our audiences, actors, and crew, we were forced to put the production on hold. Now, in 2021 our production will be staged at the spacious Bayou Theatre on the UH Clear Lake campus, where CCCT is now the theatre in residence.  When limiting capacity to 25% of the 490 seat house, there is ample space for social distancing and many other safety measures in effect for our patrons.

The scene is Hazlehurst, Mississippi, where the three Magrath sisters have gathered to await news of the family patriarch, their grandfather, who is living out his last hours in the local hospital. Lenny, the oldest sister, is unmarried at thirty and facing diminishing marital prospects; Meg, the middle sister, who quickly outgrew Hazlehurst, is back after a failed singing career on the West Coast; while Babe, the youngest, is out on bail after having shot her husband in the stomach. Their troubles, grave and yet, somehow, hilarious, are highlighted by their priggish cousin, Chick, and by the awkward young lawyer who tries to keep Babe out of jail while helpless not to fall in love with her. In the end the play is the story of how its young characters escape the past to seize the future—but the telling is so true and touching and consistently hilarious that it will linger in the mind long after the curtain has descended.

Winner of the 1981 Pulitzer Prize and the New York Drama Critics Circle Award. An astonishing first play, initially presented by the Actors Theatre of Louisville, then Off-Broadway, and then on Broadway, where it established the author as a major voice in our theatre. Warm-hearted, irreverent, zany and brilliantly imaginative, the play teems with humanity and humor as it examines the plight of three young Mississippi sisters betrayed by their passions. “While this play overflows with infectious high spirits, it is also, unmistakably, the tale of a very troubled family. Such is Miss Henley’s prodigious talent that she can serve us pain as though it were a piece of cake.” —NY Times. “It has heart, wit and a surprisingly zany passion that must carry all before it…it would certainly be a crime for anyone interested in the theatre not to see this play.” —NY Post. “From time to time a play comes along that restores one’s faith in our theatre…” —NY Magazine.

Ticket’s may be purchased through our on-line box office or you may request tickets by calling the reservation line at 281-335-5228 and leaving a message.  As part of our Covid-19 protocols, all seating will be assigned. Seating preferences will be on a first come, first served basis with assignments being made to accomodate social distancing.  Tickets will be limited to 25 percent of capacity or 25 seats per performance to provide adequate spacing between groups.